The reaction to Trump’s misogynistic xenophobia basically runs in two large directions: repulsed distance and righteous celebration. As much as his racist and sexist swagger are abhorrent, the moves to distance from him run the risk of missing why Trump’s messages of xenophobia have gathered traction at this moment as well as the deeply American structures apparent in his logic. To miss this is to make the significant error that his popularity is mere happenstance and can be corrected through awareness. From a historical view of the nation’s economic and political structures, Trump presents a completely predictable version of violent white male backlash to the mere appearance that structures of the nation are undergoing shifts.

Trump has spoken in vacuous ways about Mexico and Mexican migrants to the United States, including tapping into a mythology of people migrating and then bearing children to seek citizenship for themselves. None of his pronouncements are born out by facts. The flow of vulnerabilized peoples from the Global South to the North has a great deal more to do with transnational capitalism than individuals’ lawfulness. Birthright citizenship is a tactic that migrants do not use to pursue citizenship, as there are myriad complications for the migrant parents of U.S.-born children. Why, then, has this vitriol and his rapper-like swagger gained so much traction now? To answer this question requires putting Trump and what he represents in the longstanding racist structure and myopic ideological fantasy of the nation.

In many ways, Trump is poster child for this material structure of the United States. He is the child of wealthy parents who was gifted his first million dollars. He is so terrifyingly wealthy that his bank account secures a great deal of access and status, including having his empirically nongood looking talking head on television regularly, often accompanied by beautiful women. He is the embodied doublespeak of having intertwined material structures that have paved his way to platforms where he can spout a rhetoric of individualism and meritocracy and from that basis, protectionism. His proselytizing about the nation’s values drowns out the structures that have protected and grown his status. Meritocracy had very little to do with it but structural heteropatriarchal racism had a whole lot to do with it.

As the meme below articulates, Trump’s platform, vacuous and fatuous as it is, can be read critically as an indictment of the nation. The meme suggests that Americans should be ashamed that he is so popular because he represents what is wrong with the United States. But rather than his popularity being something that is merely an embarrassment, Trump represents the ways a nation founded on racist violence will push back when the structures underneath the shallow discourses of exceptionalism seem to be under threat of transformation. This should not be terribly surprising, given the tears and denial that flow when overtly racist symbols, such as the confederate flag and using caricatures of native peoples as mascots, are named for what they are. And yet, one of the markers of contemporary white supremacy is its tenderness, a notable specificity different than at other moments in the nation’s history. 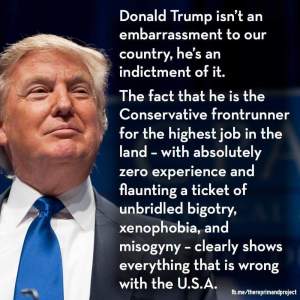 In the presidential debates in 1980, the two Republican forerunners, George W. Bush and Ronald Reagan, each espoused much more moderate views on immigration. In a televised debated, Bush spoke the processes that rendered some forms of labor illegal:  “Because, as we have made illegal some kinds of labor that I’d like to see legal, we’re doing two things. We’re creating a whole society of really honorable, decent, family-loving people that are in violation of the law and secondly we’re exacerbating relations with Mexico.” Reagan added, “Rather than talking about putting up a fence, why don’t we work out some recognition of our mutual problems?” “Open the borders both ways.” Today, that would sound more like two quite progressive Democrats. What has shifted since 1980 that makes Trump’s rhetoric not only likely but predictable in its popularity?

We have seen, in the past decades, the election of the first African American president, and many states are moving towards a “majority minority” status, in which the percentage of racially minoritized will outsize that of the Euro-descendant residents. Even though the demographics and certain visual markers present an image of “diversity” [re: nonwhite], on virtually every social indictor gathered, Black and brown peoples are far more likely to encounter harm, dis-ease, and violence. In other words, the nation’s structures continue to fulminate the accelerated proximity to harm and death for entire populations. In fact, the reaction to the mere presence of nonwhite persons in popular culture often reveals a deep-seated default, preference for, and protection of whiteness as beauty, intelligence, and humanity itself.

Trump and his supporters are wielding and enacting backlashes based only on the perception that there are material shifts underway. None of the economic, political, or cultural structures in the nation have shifted to destabilize white material wealth and its necessary companion, anti-blackness. But the mere appearance that this could happen is enough to bolster violent backlash. Trump’s comments and the Boston-based brothers who brutalized a Latino homeless man are not spikes out of nowhere. Contrary to the clichéd neighbor’s quote of “he always seemed like such a nice guy” on the evening news after a mass shooting, we should know far better about the long-standing history of white material investment and the ways it will protect itself. We cannot claim to be surprised when it’s been foundational to the nation.

Trump’s platform and its popularity presents an opportunity to reckon with the stratified racist history of the nation, precisely while it stands at the precipice of demographic shifts. But doing so will require a more rigorous engagement with the historical and contemporary structure of white heteropatriarchal structures. For example, the 14th amendment, the legal clause being erroneously referenced in political discussions about birthright citizenship and “anchor babies,” should be understood as one of the material ways that inalienable citizenship for white Americans has always rested upon contingent status for others. At the time, the 14th amendment was passed as a way to include Black Americans who had undeniably, forcibly, been part of the wealth accumulation of the nation. And now, the question of restricting birthright citizenship samples another, differently but connectedly, vulnerablized population: poor migrants from the global South. In 1868 and now again, the question of citizenship is played out upon a racialized economic structure that builds protected wealth for some upon the backs of others. Citizenship exists unquestionably for some because it does not for others, and the mantle from which these politics of inclusion are bequeathed speaks volumes about these relationships.

Despite the ignorant fears of Trump and his followers, demographic shifts alone will not transform material structures of white heteropatriarchal capitalism and its hierarchies of power that create wealth for some by containing others in poverty. The question is if Trump’s vitriol raises enough revulsion to actually reckon with the structures that make him in many ways an entirely predictable polemic.